You are here: Home / Uncategorized / The future of our industry

At SEG 2017 in Houston I was asked by several students, including two students from Romania, if there is a future for our industry.  Listening to media stories of renewable energy replacing fossil fuel energy in a utopian decade or so, and electric cars replacing internal combustion cars, the students were wondering whether getting a degree in geology or geophysics is a good long-term career choice.  After giving several students several variations on the same answer, I decided to write an entry on this subject for my personal blog and TLE.

We are working in the largest industry in the world by revenue and market capitalization.  The top 4 oil and gas companies ExxonMobil, Shell, Chevron and BP have a market capitalization of about $1 trillion and annual revenues in the same range.  Yet these 4 companies represent only 18% of the total market, with the rest of 82% distributed among many National Oil Companies (NOC) like Saudi Aramco, Petronas, Petrobras, Pemex, Statoil, Sonangol, Ecopetrol, etc.  The initial public offering (IPO) of Saudi Aramco in 2018 will create a company with a market capitalization in the $1-2 trillion range, the largest IPO in history, making Silicon Valley unicorns look like tiny blips in the market.  This enormous value and value creation industry will not disappear overnight and be replaced by renewables and electric cars, as the media would like you to think.

Rising living standards over the world, particularly in non OECD countries like China and India will move billions of people in the global middle class.  As growth accelerates, so does consumption as more people get access to air-conditioned homes, cooking energy, cars and appliances like refrigerators, dishwashers and laundry washers.  Access to energy is fundamental to improving quality of life and is a key imperative for economic development.  In the developing world, energy poverty is still rife.  Nearly 1.6 billion people still have no access to electricity, according to the International Energy Agency (IEA).

The first part of my answer to the students was that oil and gas products are not only used for energy and transportation; they are the main component in plastics and fertilizers. Also, asphalt and road oil used to build roads, highways, playgrounds, and sidewalks, are made from oil products.  Plastics are produced from natural gas, and feedstocks are derived from natural gas processing and from crude oil refining.  Figure 1 shows the percentage comparison of the different types of energy production: oil, gas, coal, hydro, nuclear and renewables, while Figure 2 shows the size and contribution of each energy type in the four major areas of use:  Transportation, Residential and Commercial, Industrial and Electricity Generation.  Oil and gas remains and will be for the next 50 years the world’s primary energy source.  Nuclear and renewables will grow strongly, with natural gas growing the most.  Solar and wind renewable energy, as you can see in Figure 1, account for only 4% of the global energy mix, and will see tremendous growth in the next 25 years to account for about 11% in 2040. Renewables will have the greatest impact on electricity generation and to a much smaller extent transportation, with almost no impact on residential, commercial and industrial energy use, as you can also see in Figure 2.  The bottom line is that 50 years from now, when the current student generation is retired and will start mentoring the next generation, oil and gas will still be the most important source of energy in the world.

As global economies grow and government policies change, the energy mix will continue to diversify. The diversification of energy supplies reflects economics and advanced technologies as well as policies aimed at reducing emissions.  Natural gas is the largest growing fuel source, providing a quarter of global energy demand by 2040. The abundance and versatility of natural gas is helping the world shift to less carbon intensive energy for electricity generation while also providing an emerging option as a fuel for certain types of transportation.  The world will need to pursue all economic energy sources to keep up with the increase in global population from 7 billion people to 9 billion.  Oil and natural gas will likely be nearly 60 percent of global supplies in 2040, while nuclear energy and renewables will grow about 50 percent and be approaching a 25 percent share of the world’s energy mix. 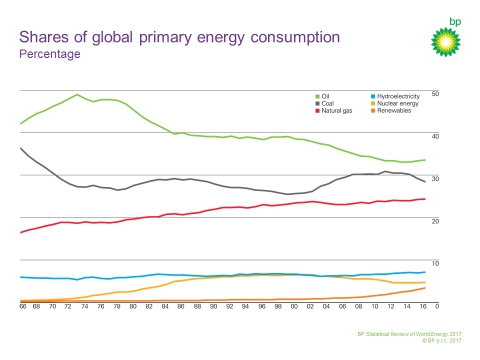 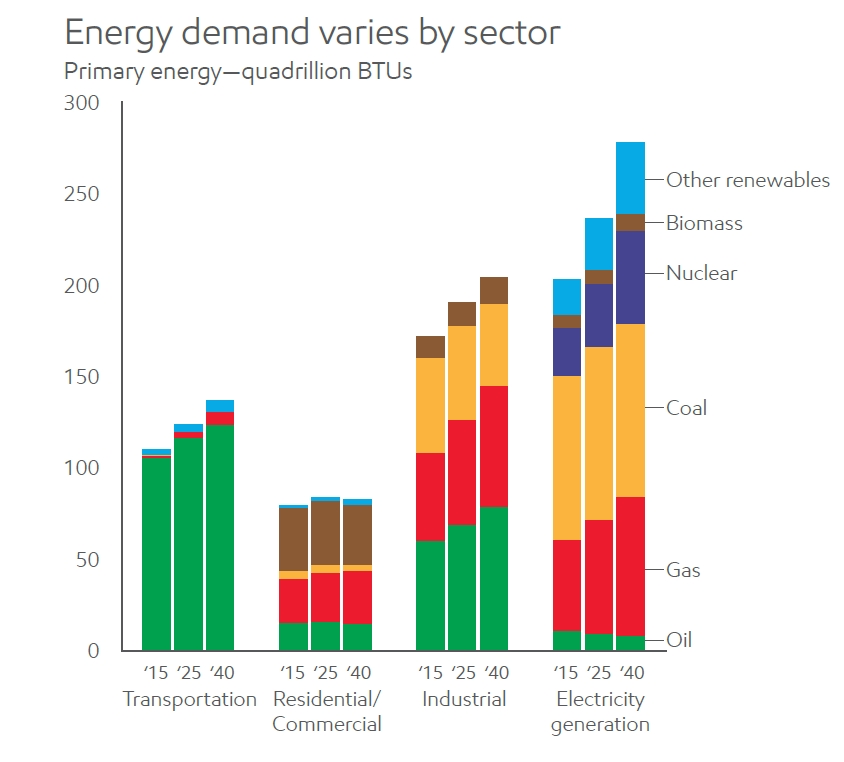 The second part of my answer to the students was that electric cars will grow from the current 1.2 million to 100 million in 20 years, but will be only 5% of the total of 2 billion cars.  There are about 1.2 billion cars in the world today, and the number will grow to about 2 billion in 20 years.  In the US there are approximately 800 cars per 1000 people.  In Germany 600, in China about 100 and in India around 20.  As China and India catch up to the car density in the US and Western Europe, a lot more cars will be manufactured, and electric cars will see a tremendous growth, a factor of 100.  But twenty years from now 95% of the cars will still run on gasoline, and the internal combustion engine will also increase in efficiency to keep up with the technology advances in the electrical cars.  And this is just my personal opinion, but I think electric cars are for wusses.  I love the low growling vibration of my 5.5 liter V8 turbocharged Mercedes AMG engine, even though I get less than 20 miles per gallon. 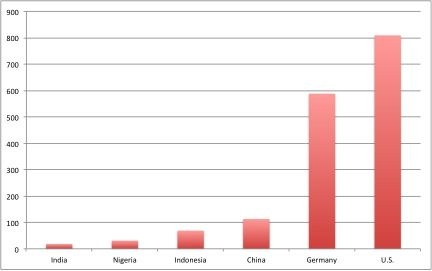 Figure 3:  Distribution by country of cars per 1000 people.

So my advice to the students in summary?  It’s a great industry to work in for the long run.  The salaries are good, you get to travel and see the world, and you can provide energy services to the world.  Business, industry, commerce and public services such as modern healthcare, education and communication are highly dependent on access to energy services.  There is a direct relationship between the absence of adequate energy services and many poverty indicators such as infant mortality, illiteracy, life expectancy and total fertility rate.  And if you want to do even more good in the world, volunteer for Geoscientists without Borders.

Submit to my newsletter :)

Alexander Mihai Popovici is the Chief Executive Officer and Chairman at Z-Terra Inc., a provider of state-of-the-art geophysical and geological technology, services and software for the upstream oil and gas industry.

This site uses Akismet to reduce spam. Learn how your comment data is processed.